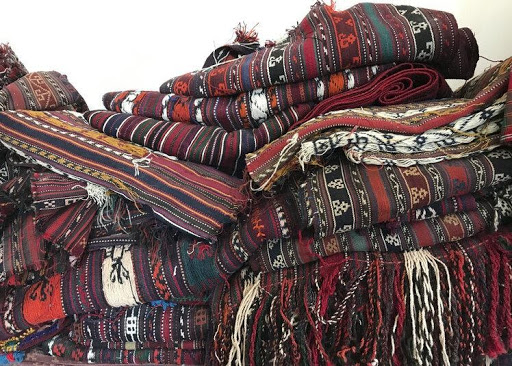 Anamnesis is Nazanin Sadr Azodi’s collaboration with four Iranian tribal women, who, in a show of rugs, use the power of recollection and the art weaving to tell their personal stories. The project explores how the tradition of rug weaving is slowly vanishing in Iran and the root cause for this. Anamnesis aims to restore the weavers to the position of creators as opposed to manual laborers by reinstating the power of symbols and the heritage of storytelling in weaving, a practice that is an important part of nomadic and tribal culture in Iran.

Nazanin Sadr Azodi is an Iranian-American textile artist and designer based in New York City. Born in 1981 in Tehran, Iran, Sadr Azodi moved to Washington D.C. at the age of 11 before moving to New York in 2004. She holds a BFA from the prestigious Corcoran School of Art & Design in Washington D.C.

Sadr Azodi’s 16-year career in the design industry has afforded her an in-depth view of the mass-market and its unintended damaging effects on local crafts. She, not only as a maker but also as a consumer, wants to support products that have soul and a story to tell. Naz believes what is most needed in today’s market is a spotlight on the talented craftspeople who are effectively the key contributors to the world of design and consumption. Her need to better align her daily practice as a designer and maker with her desire to highlight the rare artisans led her back to her home country of Iran where she rediscovered her love of textiles and the women who make them. To learn about the history and mythology of rug weaving in Iran was a haunting and unforgettable experience that Naz wants to share with others.