Anatolian Kilims and Their History 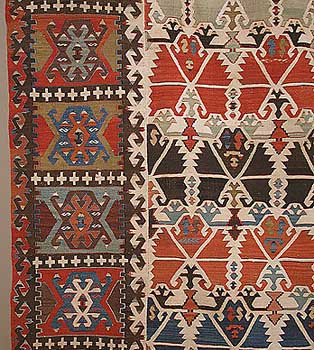 “Anatolica, Anatolus, Anatoli, Anatolia” was a name used in The Middle Ages by the Christians. Arabs used the name “Memaliki Rum ” and Crusaders called it “Romania” both mean Land of Romans. When the Turkmen invaded in the 11th century they translated it as Anadolu. It is now known as Turkey

There are two main hypotheses about the origins of Anatolian Kilims:

1) The first is – Turkmen nomads brought kilim weaving with them from Central Asia and western Turkestan. They came from a harsh climate where winters were stormy, snowy and very cold, the summers were hot and dry. As nomads they had vast herds of sheep, goats, camels and horses. They used the wool for felt making and many other kinds of textile weaving. Also mummies, dated to 1500BCE to 800CE, discovered in the Tarim Basin were buried with flat woven wool fabrics and felt coats.

2) The other being The Mother Goddess Hypothesis – it states that Anatolia had developed its own weaving tradition in the Neolithic period that continues to the present day. It states that there was a weaving tradition in Anatolia long before the Turkmen people migrated from Central Asia. To understand this second hypothesis, one must read Marla Mallett’s article “The Goddess from Anatolia”

There is another piece of documented evidence for a long weaving tradition in Anatolia. It comes from the ancient Phrygian city Gordio. Gordio is best remembered in history from Alexander the Great’s visit to cut the “Gordion Knot” during his campaign to become the ruler of Asia. Some significant plain woven textile fragments and felts were found in burial sites there. These finds indicate that the slit-weaving technique using geometric designs were already in place long before the Turkmen migrated from Central Asia.

Mr. Karadag is an internationally known Turkish rug and textile expert as well as an experienced leader of specialized tours to Turkey and Central Asia.

A “show and tell” will follow the program, members are encouraged to bring Turkish pieces to share with the group and for Mr. Karadag to comment on.