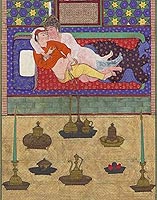 After serving as the Curator of Islamic Art and Antiquities at the British Museum, London, Sheila R. Canby became the Patti Cadby Birch Curator in Charge of the Metropolitan Museum of Art’s Department of Islamic Art in 2009.  In addition to publishing extensively and lecturing widely, she organized numerous exhibitions at the British Museum, including the highly acclaimed Shah ‘Abbas: The Remaking of Iran.