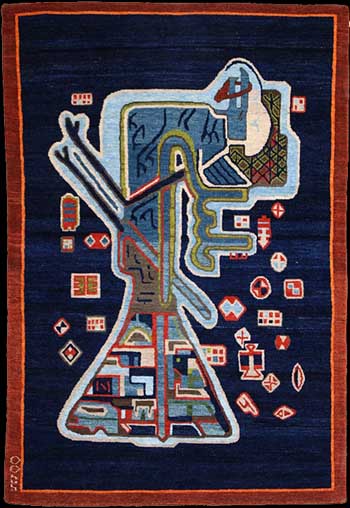 Parviz Tanavoli is one of Iran’s leading artists and is considered the country’s first significant modern sculptor. Several of his works are included in the exhibition “Iran Modern” to be held at Asia Society, New York City, from September 6, 2013, to January 5, 2014. He is perhaps best known to the rug world as the author of a great many books and articles on Iranian tribal and village rugs, on which he has done research in all parts of Iran for decades. Since the late 1950s he has created works in bronze, ceramic, lithography, fiberglass, and scrap metal. His oeuvre displays a deep engagement with Persian folkloric traditions, poetry, and literature, all expressed in a recurring series of subjects, including the calligraphic figure of the word Heech (which means Nothingness), Farhad the Mountain Carver, Locks, Poet, Prophet, Lovers, Walls, Hand, Lion, and Bird. The rugs he has designed also reflect these motifs, and they are woven for him by tribal and village weavers in various parts of Iran, who find his designs very congenial. Only wool dyed with natural dyestuffs is used for his rugs. The results are dazzling colorful wool artworks, many featured in groundbreaking and popular exhibitions in several countries.

Parviz Tanavoli graduated in 1955 from the Tehran School of Fine Arts and in 1958 won the sculpture prize in the First Tehran Biennial, the first of many prizes over the years. The next year he graduated from the Brera Academy of Fine Arts in Milan, where he studied sculpture. From 1961 to 1963 he taught sculpture at the Minneapolis College of Art and Design. He also taught at the College of Decorative Arts in Tehran and from 1964 to 1979 was the head of the Sculpture Department at Tehran University. He founded the Iranian Artists Group with five other painters in 1961 and six years later founded another group of fellow artists, Group 5. He was in Minnesota again in 1971, when he was visiting artist at Hamline University in St. Paul. He founded the Tehran Rug Society in 1973, and organized the society’s inaugural exhibition “Tribal Animal Covers of Iran,” and its second three years later, “Lori and Bakhtiyari Flatweaves.”

He has had many solo exhibitions in Iran, Europe, the United States, and Canada and has participated in numerous biennales and group exhibitions. His work is owned by many private and public collections, including The Metropolitan Museum of Art, MoMA, Grey Art Gallery at New York University, Walker Art Center, Minneapolis, British Museum, Tate Modern, London, Royal Scottish Museum, Edinburgh, Museum of Modern Art, Vienna, Jordan National Gallery of Fine Arts, Amman, and Qatar National Museum, among many others. In addition to exhibitions of his own work, Parviz has organized a number of traveling exhibitions of traditional Iranian art that he has collected over the years, and has produced important catalogues for each of them. These include lion rugs, figural padlocks from earliest times to today, a wide variety of Persian steel objects from the Safavid period onward, and decorative cosmetic kohl containers of all periods, among others. He divides his time between Vancouver and Tehran.