Cartier and Islamic Art: In Search of Modernity 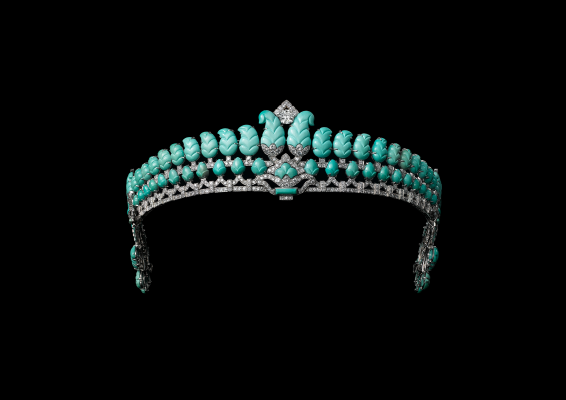 Around 1902, under the direction of Louis J. Cartier, the French jewelry firm of Cartier began to move away from the neo-classical mode of jewelry design, rejecting the naturalism of art nouveau, to experiment with abstraction and other contemporary and historical inspirations including Japanese textiles, Chinese jades and the arts and architecture of the Islamic world. These influences were essential to the development of a modern aesthetic and signature style for the Maison. Louis Cartier, director of the Paris branch, began to collect art, including Persian and Indian paintings and luxury arts and Indian jewelry. Many of these were brought by his brother, Jacques, who in 1911 travelled to Bahrain in search of direct contact with the pearl market and to India in search of new clientele. With the added talents of designers such as Charles Jacqueau from 1909, a specific lexicon of Islamic forms and color combinations began to emerge in both sketchbooks and finished pieces, a design vocabulary that would permeate Cartier’s production throughout the 1920s and 1930s, into the 1940s. Other contemporary jewelry firms may have found similar inspirations in Islamic arts, but none executed and recombined specific design ideas with the same rigor nor formal consistency. The new vocabulary would enter permanently into the grammar of Cartier’s design for both jewelry and luxury objects, manifesting throughout the later twentieth century, until the present.

Cartier and Islamic Art: In Search of Modernity
An exhibition at the Dallas Museum of Art,
May 14-September 18, 2022

Heather Ecker was the first Marguerite S. Hoffman and Thomas W. Lentz Curator of Islamic and Medieval Art at the Dallas Museum of Art (2018-2022). Dr. Ecker was one of four curators of Cartier and Islamic Art and author/editor of its catalogue editions. She was a Visiting Professor and Visiting Scholar in the Department of Art History & Archaeology at Columbia University in 2017-2018. From 2011-2014, she was the Head of Curatorial Affairs at the Aga Khan Museum, Toronto. Previously, she served as Curator of Islamic Art and Department Head, The Arts of Asia and the Islamic World at the Detroit Institute of Arts, and as Assistant Curator at the Museum of Islamic Art, Doha. She received her Dphil in Islamic Art and Archaeology from the University of Oxford, and holds undergraduate degrees from Harvard University, and the University of London. She has taught previously at Columbia University and the University of Michigan, and has been affiliated with Wayne State University and the Edith O’Donnell Institute for Art History at the University of Texas, Dallas.

Heather Ecker’s areas of research include the visual cultures of the Islamic World with an emphasis on the Mediterranean basin, transregional and intercultural exchanges in the Islamic and Medieval West, antiquarianism and archaeology in the early modern age, cosmology and astronomy in the classical and early modern Islamic eras, the evolution of cultural property laws and the history of art dealing and collecting, particularly of Spanish art and architecture.