Celestial Geometry as a Soul Carrier to The Other World 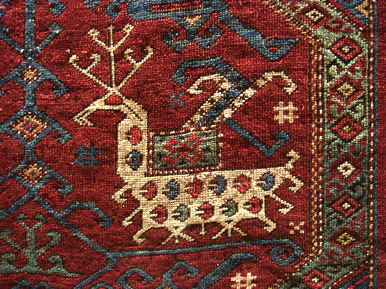 Eberhart Herrmann introduces a new discipline which he has named Applied Mathematics in Art History. He discusses a few basic patterns, lay-outs and measures used in Oriental carpet and textile art, deduced from the observation of the heavens. He explains transition, infinity, directional, and gateway designs as an expression of eschatological geography and gives a practical example in the origin and development of the so-called C-motif in Oriental cultures.

A fascinating and thought-provoking presentation shows the means of unlocking the seal to rediscover the beliefs which directed carpet patterns and indeed many other forms of ancient art until recent times. The results of a lifetime research will be published later this year, or in early 2014, titled:  ‘Observation of the Heavens as the Basis of Art History’.

Eberhart Herrmann grew up helping in his parents’ business of distinguished Oriental carpets in Munich, Germany. However they wanted him to have a better education than just becoming a carpet dealer and he trained instead as a lawyer – and only later returned to the field of carpet art. He has written 16 books, publishing and discussing some 1800 rugs acquired worldwide for his renowned exhibitions. As he studied and thought about the complexity of carpet patterns he gradually shifted away from many mainstream theories and finally came to solutions for carpet art as well as for art historical research in general – a lifetime result of over 60 years thinking and living carpets.