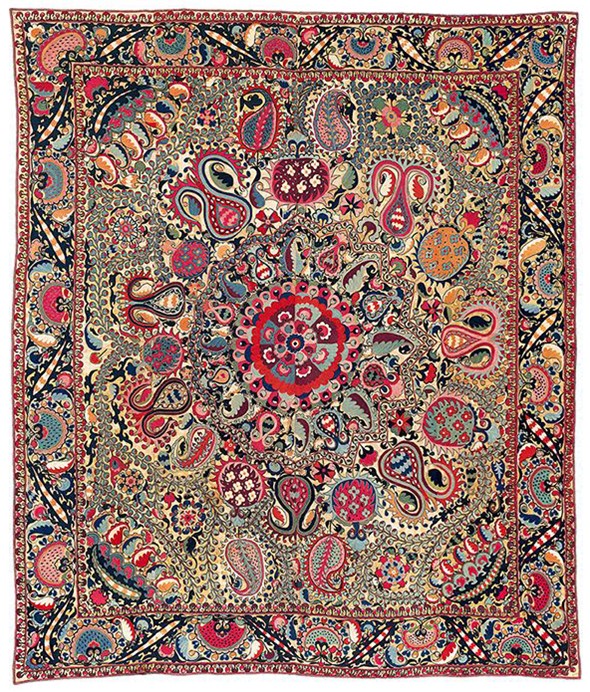 Over the past half a century, Suzani embroideries of Central Asia have captured the imagination of textile collectors and aficionados around the world. Examples from the late 18th Century up to the early 1900s are now considered as some of the most coveted of all textile arts and most tend to demand high prices at major auctions, antique fairs and galleries.

This talk will explore the aesthetic and artistic merits of these traditional dowry embroideries in order to help understand and appreciate their appeal. By analyzing and categorizing the specific characteristics of design, color, type of stitches and material used to make them, dating and attribution will become easier for both those who are familiar and unfamiliar to this textile art.

Ali Istalifi, based in London, is a leading specialist in Central Asian textiles, weaving and ethnographic arts. His late father, Abdul Istalifi, a prominent rug and textile dealer in Kabul, Afghanistan, moved his family to the U.K when Ali was ten years old. Ali received a B.A with Joint Honours in Film and TV Studies and American Studies and intended to pursue a career in media. But shortly after he graduated, September 11th happened, which subsequently lead to Afghanistan being liberated. Ali decided that he wanted to return and help rebuild his father’s war-torn home town, Istalif (from where he got his surname). In the process of successfully regenerating the economy of Istalif by rebuilding their local bazaar and reviving their famous traditional pottery art, Ali accumulated an exceptional collection of silk textiles for himself and others, just as his father had helped many prominent collectors around the world to build theirs during the 1970s and 1980s.

Ali Istalifi has spoken at the World Ikat Symposium sponsored by the World Craft Council and held at the Brunei Gallery in School of Oriental and African Studies (SOAS University) in London, as well as to the Oriental Textile and Rug Society of Great Britain (OARTS). He wrote the catalogue for a special exhibition of Central Asian ikats in the Birmingham Museum of Arts (Alabama) and was one of the keynote speakers in their symposium on ‘Communities of Clay’. In 2018, American Conference on Oriental Rugs (ACOR) sponsored a talk tour for Ali, where he presented ten talks on three subjects to nine rug and textile societies across North America, including Montreal, Boston, Washington D.C, Princeton, Denver, Chicago, San Francisco, Seattle and Los Angeles.