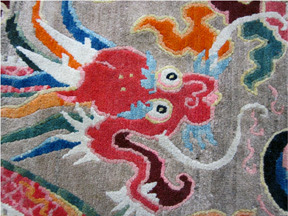 With the aid of examples, Hajji member Nicholas Wright will illuminate challenges in researching Tibetan weavings, including provenance within Tibet, dating weavings, and dyestuffs.
Nicholas H. Wright is a retired medical-epidemiologist who bought his first rugs in Lahore, Pakistan in 1968. Jerry Straka and Don Wilber of the Princeton Rug Club introduced him to the Hajji Baba Club in 1980. He served on the American negotiating team for the Iran treaty.