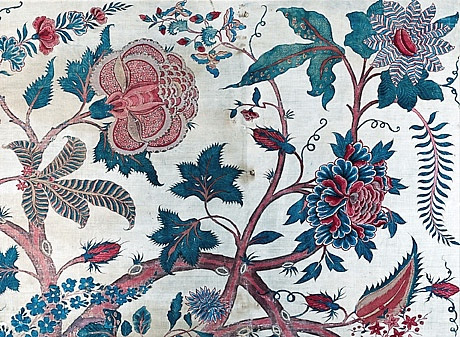 Textiles from India were the currency of trade in South Asia from the 13th century or earlier through the 19th century. An astonishing variety of fabrics were made specifically for diverse audiences in the East (traded to the archipelago of Indonesia, Thailand, to Japan and to Sri Lanka). Early textiles traded to the East were highly prized and so survive often in fragmentary form. These were known as Sarasa in Japan, in Indonesia they are generally found as hand painted, or block printed examples, and sometimes as the prized double ikat “Patola”. A similar trade to the West to audiences in the great colonial powers – Holland, France, Portugal, Britain also survive from the 16th century onward. Examples could be embroidered coverlets or dress fabric (for Portugal and Britain) or painted textiles (Chintz) for diverse European audiences.

In contrast, textiles for the domestic market were utilitarian, for everyday use, or for special occasions, or for Royal consumption, or use in temple rituals. They display great variety of materials used (Cotton, Silk, Wool), techniques (stamping, painting, tie-dyeing, weaving, supplemental threads, embroidery etc).

The lecture will present a series of textiles of Indian origin for trade and domestic consumption, each selected primarily for its intrinsic appeal to the collectors. It should serve as an introduction to Indian textiles. The Parpias will bring a few textiles to show and handle carefully after the presentation.

Collectors Jeevak Parpia—Professor of Physics, College of A&S, Cornell University and Banoo Parpia—Director, Asia Alumni Affairs and Development, Cornell University will present power point images of several textiles intending to illustrate the diversity and beauty of these objects. The Parpias have been collecting Indian textiles since the 1980s. They have exhibited examples from their collection at several shows at the Johnson Museum at Cornell University, as well as at Mount Holyoke College. Recently two painted textiles (Pichwais) from their collection were shown at the Art Institute in Chicago. Trade textiles will be shown at an upcoming exhibition at the Royal Ontario Museum in late 2019 and a separate more comprehensive show at the Johnson Museum in late Spring 2019.