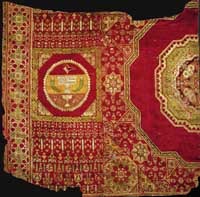 Dr. Jon Thompson has been one of the most important scholars and authors, particularly in the study of classical carpets. Thompson became interested in carpets and textiles while practicing medicine in London. His interest in the study of rugs and resulting publications earned the attention of Louise Mackie, then curator at The Textile Museum. What began as a private interest became a second career and, from 2001 to 2007, Thompson held the position of May Beattie Fellow in Carpet Studies at the Ashmolean Museum of Art and Archaeology and the Khalili Research Centre, at the University of Oxford. In this capacity, he directed the Beattie Carpet Archive, working towards the establishment of a database of images and notes on carpets made by May Hamilton Beattie (1908-1996) in order to make her research available to scholars. His work also involved teaching courses on carpets and textiles of the Islamic world at Oxford University and at the British Museum. Though now retired from Oxford, Thompson continues to teach in London at the School of Oriental and African Studies (SOAS) and at the Victoria & Albert Museum.