The Blueberry Pie Carpet: A Morris Carpet at Home in Chicago 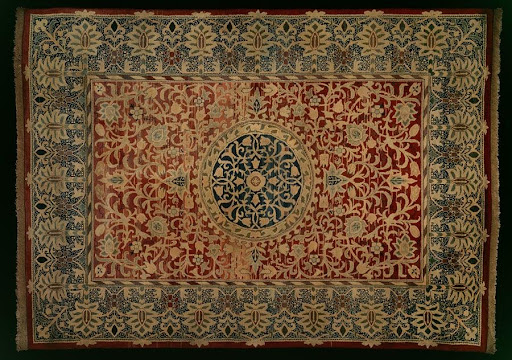 The Art Institute of Chicago has one large and important carpet made by Morris & Co. for the Glessner House, which is located in the historic Prairie District neighborhood of the city. The Boston architect Henry Hobson Richardson, who was hired by John and Frances Glessner to design a new home for their family in the mid-1880s, was an admirer of the work of William Morris. Richardson shared this admiration with Frances Glessner, and when it came to decorating their new home in 1887, she supervised the purchase of a number of textiles and wallpapers from Morris & Co. This talk will explore decoration of the Glessner House, centered on the large entry hall carpet, and focused on the influence of historical and Middle Eastern textiles manifested in the carpet and Morris’ work.

Melinda Watt has been Chair and Christa C. Mayer Thurman Curator of the Textile Department at the Art Institute of Chicago since June of 2018. In this role, she oversees the global textile collection formed by a series of visionary department heads, and leads the textile installation program both within the department and throughout the museum. Her first exhibition at the museum, Morris and Company: The Business of Beauty, will open on December 18. Watt is also the current president of the Textile Society of America.

Previously, Melinda Watt was a Curator in the department of European Sculpture and Decorative Arts at The Metropolitan Museum of Art as well as Supervising Curator of the Antonio Ratti Textile Center. She was a co-curator of Interwoven Globe: The Worldwide Textile Trade, 1550-1800 (2013), and she organized an exhibition of the Museum’s collection of seventeenth-century embroidery at the Bard Graduate Center. The catalogue, English Embroidery from The Metropolitan Museum of Art 1580-1700: ‘Twixt Art and Nature, was awarded the Textile Society of America’s annual book award for 2008. Melinda has taught a number of courses on textile history subjects at New York University, Bard Graduate Center and City University of New York, often collaborating with professors at these institutions. She also organized a series of small, focused textile installations at the Metropolitan Museum. These projects covered a diverse range of topics including Renaissance velvets, 18th century menswear fabrics, and the textiles and wallpapers of William Morris. Her last exhibition at The Met was The Secret Life of Textiles: The Milton Sonday Archive, celebrating the former Cooper Hewitt curator’s extraordinary textile research archive, which was donated to the Antonio Ratti Textile Center.