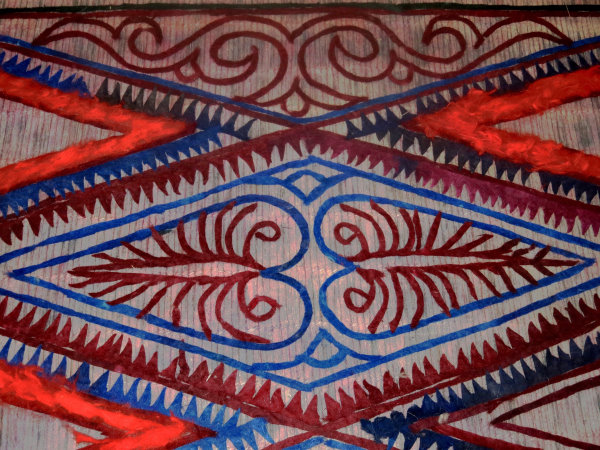 Felt making has existed for millennia in the cities and villages of what is now the Xinjiang Uyghur Autonomous Region of northwest China, homeland of the Muslim, Turkic-speaking Uyghurs. Archeological discoveries give a sense of this ancient art, which continues to flourish in the oases that dot the southern rim of the Taklamakan. We will first examine the processes, and tools that distinguish Uyghur felt from those of the Turkmen, Kyrgyz, Turks and Mongolians, noting similarities and differences. Felt making workshops in and around Qashgar, Yarkend, Qarghilik and Khotan are traditionally operated by men, originally utilizing the guild system of master and apprentice. Women participate in family workshops as well, playing an important but unacknowledged role. In Turkmenistan and Kyrgyzstan, women are the sole felt makers.

Secondly, we will examine how Uyghur cultural history, material culture and the “everyday” exist within the spiritual landscape of southern Xinjiang through participation in shrine visitation and the use of the risala, a treatise or guidebook governing the moral, spiritual and ethical behavior of artisans, shedding light on little known aspects of Uyghur sacred history and accompanying rituals.

Christine Martens (New York) is an artist and independent researcher documenting and writing about textile traditions of Central Asia in relationship to women’s rituals and ceremonies. She has conducted fieldwork in Kyrgyzstan, Uzbekistan, Tajikistan, Turkmenistan, Kazakhstan and Mongolia and Northwest China, as a Fulbright Scholar, IREX fellow and Asian Cultural Council grantee.