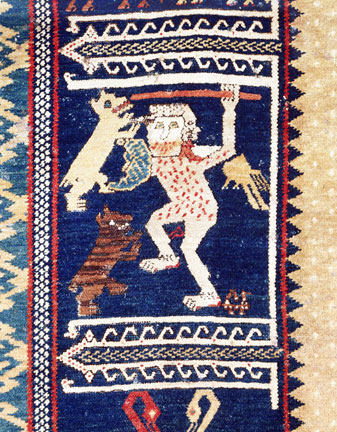 8:00 am
Depart NYC by private coach

Prof. Holod is College of Women Class of 1963 Term Professor in the Humanities, History of Art Department, University of Pennsylvania. An art and architectural historian and archaeologist of the Islamic world, she has carried out archaeological and architectural fieldwork in Syria, Iran, Morocco, Turkey, Central Asia, Tunisia, and Ukraine. She was Convener, Steering Committee Member, and Chair, Master Jury for the Aga Khan Award for Architecture. She was co-curator, with Robert Ousterhaut, of Archaeologists and Travelers in Ottoman Lands at the Penn Museum (September 2010 to June 2011) She is co-author and co-editor of City in the Desert (1978); The Mosque and the Modern World (1997); The City in the Islamic World (2008) and An Island Through Time: Jerba Studies (2009).

The story of the ancient Middle East is one that the Penn Museum can tell uniquely well: the Museum was founded in 1887 to house artifacts from its first expedition to Nippur, the first American-led archaeological project in the region. Since then, the Museum has excavated an unparalleled constellation of sites in the Middle East, where active research continues today. The Middle East Galleries will highlight the Museum’s pioneering research, with updates as we make new discoveries each year. 95% of the material on display in the Middle East Galleries was excavated by Penn archaeologists, including world-renowned objects like the “Ram in the Thicket,” and the Galleries explore how archaeologists found and interpreted such fascinating artifacts.

12:30-1:45
Lunch in the Fiske Kimball Room at the Philadelphia Museum of Art

2:00-3:00
Tour of the Carpet galleries at the Philadelphia Museum of Art with Dennis Dodds

The Philadelphia Museum of Art houses an internationally renowned collection of carpets from the major weaving centers of the world. This superb collection includes carpets from Safavid Persia, Ottoman Turkey, Mamluk Egypt, and several dramatic Dragon carpets from the Caucasus as well as an impressive Admirals carpet from 15th century Spain.

With graduate degrees in Architecture and City Planning from the University of Pennsylvania, Dennis Dodds also studied medieval Islamic architecture with a focus on its ornament. He has lectured widely and is a veteran collector with a special interest in early Anatolian and Turkmen tribal and village weaving.

Dennis was the original American Editor of HALI magazine, first published in 1978 London. He chaired the 8th ICOC conference in Philadelphia, co-edited the catalogue Oriental Rugs from Atlantic Collections with Dr. Murray Eiland, Jr., and with a Mellon Grant wrote the book Oriental Rugs in the Virginia Museum of Fine Arts. He has lectured internationally, as well as authored several articles.

The Near Eastern Art Research Center in Washington, DC honored him with the Joseph V. McMullan Award. In 1999, Dennis was elected General Secretary of the International Conference on Oriental Carpets, a position he still holds.

4:00 pm
Depart Philadelphia Museum of Art by private coach for return to NYC

The cost of the trip is $190 per person and includes all travel, museum entrance fees, curated tours and lunch.