Rags, Riches, and Patchwork: The Sacred and Secular Aspects of Buddhist Ritual Garments in Japan 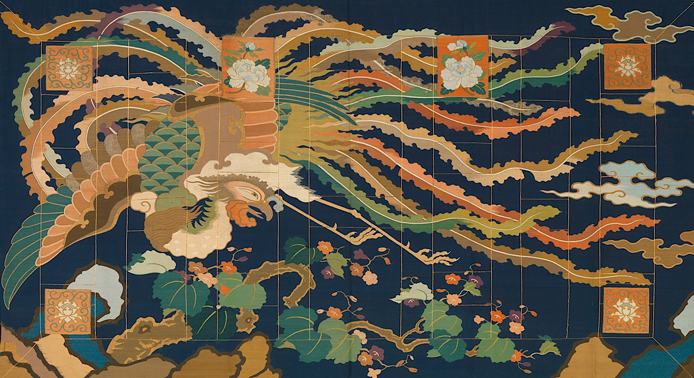 The kesa became the standard vestment for Japanese monks, nuns and priests in the sixth century when Buddhism reached Japan via China and Korea. The kesa is a rectangular garment that originally symbolized the rags worn by the Buddha when he was a mendicant monk. These cloth pieces, patched together in complex and potent patterns, served to represent not only the work of the Buddha but also the entirety of the Buddhist cosmos. Kesa today are still the most significant components of Buddhist clerical ensembles and the most intriguing. Although the Buddha himself was of princely origin, one of his precepts was contempt for wealth and ostentation. He ordered his dedicated followers to renounce all worldly goods and live by begging for food and other necessities. As an outward sign of poverty, the monks initially wore discarded textiles that would be turned into neatly patched robes. As Buddhism became a major religious institution in Japan over the centuries, kesa became increasingly elaborate. They evolved into sophisticated and resplendent garments patched together from silk brocades donated to the temples by members of the aristocracy and wealthy merchants. By donating sumptuous fabrics to the Buddhist temples, members of the lay community earned religious merit, and, by stitching the donated fabrics into elegant patchwork kesa, the priests and monks could devote their attention to the creation of a devotional work of art—-the kesa—with every stitch an act of meditation on the teachings of the Buddha.

Jacqueline Marx Atkins, former Chief Curator for the Allentown Art Museum in Pennsylvania, is a textile historian and consulting curator for the Itchiku Kubota Kimono Collection in Kawaguchi, Japan. Her specialty areas are Japanese textiles and kimono, and American and Japanese quilt history. Her publications include The Textile Artistry of Itchiku Kubota; As We Are Now, So Shall You One Day Be: Skeleton Motifs in Japanese Kimono; The Brittle Decade: Visualizing Japan in the 1930s; and Wearing Propaganda: Textiles on the Home Front, 1931–1945. She received a Ph.D. from the Bard Graduate Center, other degrees from Columbia University, and a Fulbright Award for research in Japan, where she became fascinated by priests’ kesa during her studies on Japanese textiles. She has served as guest curator at the Textile Museum of Canada (Toronto) and the Munson Williams Proctor Art Institute ( Utica, NY) for an exhibition featuring kimono from the Itchiku Kubota Collection.