Recent Studies on the ‘Transylvanian’ Group of Anatolian rugs 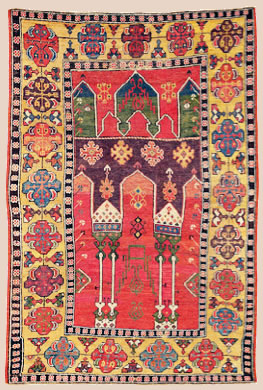 Mr. Ionescu is an independent scholar of Oriental carpets, he has dedicated almost twenty years to the study of Anatolian rugs, starting with those that survived in Transylvania. This region continues to be the repository of the richest and best-preserved group of small Turkish carpets outside the Islamic world. With nearly four hundred examples attributable to the 16th to 18th centuries, the golden period of Ottoman weaving.

In order to prove the Anatolian origin and to explain the presence of these rugs in Transylvania, Mr. Ionescu published “Antique Ottoman Rugs in Transylvania.” This book includes the entire collection of rugs in the Black Church along with the important examples from collections inside and outside Romania. The book was awarded the Romanian Academy prize for “History of Art,” a very rare event in rug literature.

“Recent Studies on the ‘Transylvanian’ Group”

Among 17th century Anatolian rugs this distinctive group is the largest and best researched. After fifteen years of study there is now a clear picture of the group.

The lecture will cover the origin of the design of early single-niche Transylvanian rugs and explore a fascinating new theory of how it came about in relation to Ottoman stained glass windows. Some of these windows can be seen in Ottoman buildings, created by the famous architect Sinan.

Next, how the double-niche format evolved from single-niche rugs in relation to the Edict of Kütahya issued in 1610 under the rule of Sultan Ahmed I.

A full classification of the group, based on a study of over three hundred and sixty examples will be presented. Showing that there is a correlation between design and dating, that is supported by paintings and inscriptions. Making it possible to date pieces within a quarter of a century.
Finally, examining two other groups of Transylvanian rugs, the “Plain-Niche” and “Coupled-Columns,” by using examples from churches in Transylvania and museums in both Turkey and the US.