Sacred Surfaces: Carpets, Coverings and Mesas in the Colonial Andes 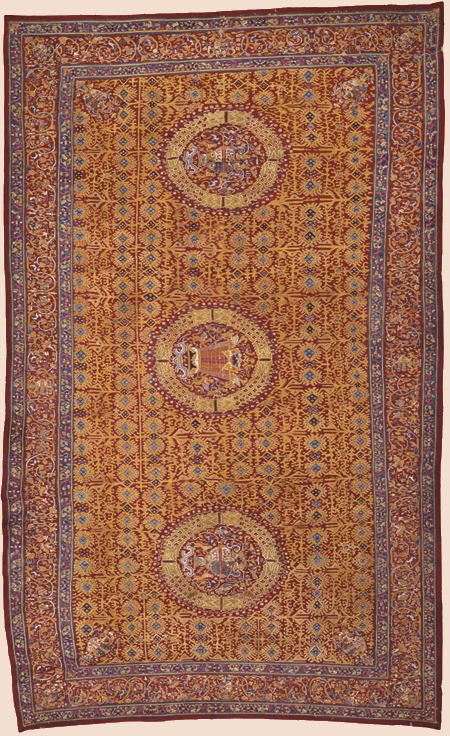 Textiles formed the surfaces of Colonial life in the Andes, and especially those associated with ritual and faith relating to the sacred realms of Christian as well as indigenous religious contexts. Carpets—woven of knotted pile or flat-woven tapestry—were not a form used in the region prior to the Spanish arrival but were introduced early in the 16th century by the Spanish who brought with them examples produced and influenced by Hispano-moresque and Middle Eastern traditions. Andean weavers adapted to the form and techniques of their production, creating remarkable examples that manifest the complex interchange of the period. From Colonial documents we also know that other forms of textiles, especially traditional warp-patterned cloth, were used in ritual contexts to cover the sacred stones—huacas—of Inca religion and wrap the sacred ancestral mummies that were honored for generations until destroyed by the campaigns to extirpate idolatry waged by Spanish clerics. They were also used to form the ritual surface, mesa [literally ‘table’] for ceremonial events and for offerings, a practice still in use today in highland communities. Elena Phipps will present the contexts and sources of textiles as coverings of floors, walls and furniture in the Colonial Andes and will explore the broader phenomenology of these covers as surfaces for sacred activities, creating and protecting sacred spaces.

Elena Phipps is a former President of the Textile Society of America (2011-2014), a non-profit organization for the dissemination of knowledge about textiles, and a Metropolitan Museum of Art Senior Museum Scholar. Dr. Phipps has a PhD from Columbia University in Pre-Columbian Art History (1989) and has worked as a textile conservator, curator, and teacher, for over thirty-five years. Her roles at the Metropolitan Museum of Art (1977-2010) included textile conservator working on a range of projects including a focus on dyes and textile analysis, managing the design and implementation project to establish the Antonio Ratti Textile Center (1989-1995), as well as co-curator of the 2004 exhibition Colonial Andes: Tapestries and Silverwork, 1530-1830, and co-author of the catalogue (awarded the Mitchell Prize and the Alfred Barr Jr. Award in 2005). In 2013, after her retirement from the MMA, she served as a co-curator for The Interwoven Globe: Worldwide Textiles and Trade 1600-1800, and as author of two essays “The Iberian Globe” and “Coloring the Globe” in the accompanying exhibition catalogue. She was concurrently guest curator of The Four-Selvaged Peruvian Cloth: Ancient Roots/New Directions at the Fowler Museum, UCLA (2013) and author of the catalogue. She has published widely on the subject of textile materials, technique and culture, including Cochineal Red: the Art History of a Color (MMA and Yale Univ. Press, 2010, Looking at Textiles (Getty Publications, 2010) among many other articles. Since 2010, Elena teaches textile history in the Department of World Arts and Culture, UCLA, and commutes from LA to NY, her home base.