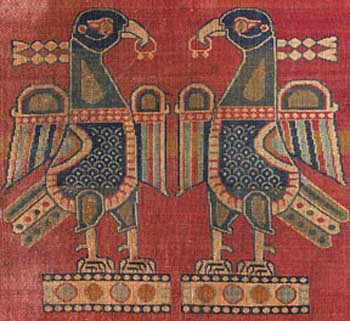 A fascinating historical period, 6th to 9th century, involving trade of luxury goods, a passage of ideas, and mixing of cultures

Sogdian merchants arose in importance on the trading routes of Central Asia during the 5th Century AD. They were famous for their trading skills. Their commercial net covered all of Central Asia and beyond. Their weaving centers produced the most precious silks, woven with motifs derived from the aesthetic vocabulary of the Sasanian/Sogdian culture and beliefs.

The universal recognition that these silks achieved made them the favorite luxury items of the royal establishments of Central Asia, extending well into Europe, where they were highly appreciated and used as precious wrappings for relics of saints preserved in the cathedrals. Pheasants, peacocks, boars, ducks, deer, winged horse, enclosed in pear roundel were the motifs woven. The representation of animals reflected the style of nomadic life, as well was symbols of royal hunting, a pursuit of the reigning aristocracies. Certain animals represented the realm of Zoroastrian divinities.

We will show some examples of these luxury products, reflecting the influence that Sasanian culture had on the aesthetics of other cultures of Asia, which resulted in such powerful representation of colorful, shining silk, which naturally became a valuable trading tool, but was so coveted by east and west alike.