Piecing together the Past: The Little-known Story of America’s First Tapestry Ateliers 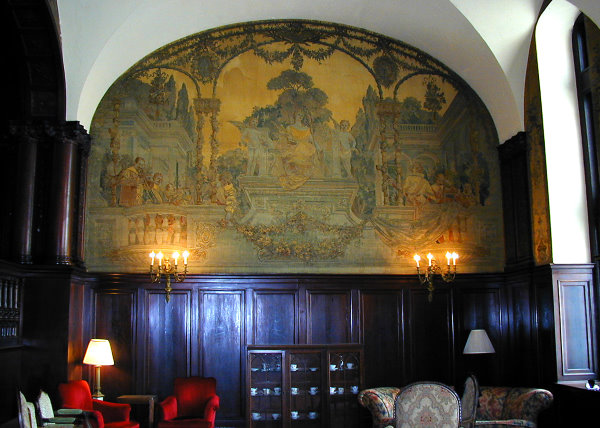 In the latter part of the 19th century, Americans developed an insatiable desire for tapestries to furnish palatial homes built in New York City and in privileged enclaves of wealth throughout the country. As the supply of antique tapestries became harder to secure, a prominent source of interior decorations gambled on a new enterprise. In 1893 William Baumgarten brought French weavers to the United States to begin the first American tapestry atelier. From their workshop in The Bronx, the weavers produced woven furniture covers and wall tapestries as part of the complete interior ensemble that Baumgarten’s decorating firm provided, usually in the manner of French 16th, 17th, or 18th century precedents that his clients demanded. In the course of the following decades, two other ateliers came into existence: Albert Herter founded Aubusson Looms, later called Herter Looms, in New York City and Lorentz Kleiser began a decorating firm, also in Manhattan, with his weaving atelier, Edgewater Tapestry Looms, in New Jersey. French historic styles gave way to contemporary designs, frequently depicting specifically American subject matter to suit the expanding market and clientele.

This lecture recreates the rise and demise of a nearly forgotten chapter in American decorative arts that flourished between 1893 and 1933. Subsequently, many of the splendid residences and commercial buildings that proudly displayed these tapestries were destroyed or remodeled, their decorations and furnishings scattered, sometimes to foreign countries. Once the tapestries were separated from their original sites, the history of their manufacture became less clear. On the other hand, some tapestries have remained in their intended location for over 100 years, hidden, as it were, in plain sight.

A curatorial consultant based in Santa Fe, NM, and principal in Vescen Consulting, Alice Zrebiec received her BA degree in art history from Douglass College, where she was elected to Phi Beta Kappa, and her MA and Ph.D. in art history from the Institute of Fine Arts – New York University. Dr. Zrebiec joined the Denver Art Museum in 1996, and in 2012 she became the Avenir Foundation Curator of Textile Art, overseeing the expansion of the department’s dedicated galleries and the development of its exhibitions and related programs until 2015. In addition to Creative Crossroads: The Art of Tapestry, she also curated for the DAM the major exhibitions Ikat: Splendid Silks of Central Asia from the Guido Goldman Collection (2001,) Gee’s Bend: The Architecture of the Quilt (2008.) and many other exhibitions, including twenty thematic exhibitions primarily focusing on aspects of the permanent collection. Prior to her work with the Denver Art Museum, Zrebiec was curator of textiles for 16 years in the department of European Sculpture and Decorative Arts at the Metropolitan Museum of Art, in charge of textiles, tapestries, carpets, ecclesiastical vestments, and fans from the Renaissance to the turn of the 20th century. She has lectured internationally and published on diverse aspects of textiles and tapestries. TMA/SC members are invited to bring one example of a rug or textile that they find particularly artistic.