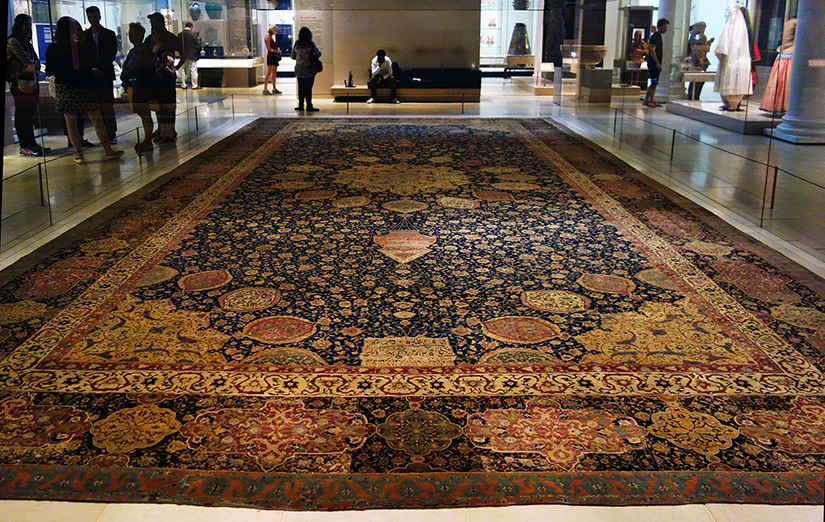 Woven as a monumental pair for the Safavid dynastic shrine in northwestern Iran, the iconic Ardabil Carpets are celebrated today as masterpieces of sixteenth-century design and technique, and are located in London’s V&A Museum and the Los Angeles County Museum of Art. The acquisition history of the two carpets is often narrated as an edgy competition between Britain and the United States in the late nineteenth century, opposing the ambitions (and budgets!) of public museums and private collectors. The carpets’ production history is another, even more political matter. Remembered together, the pair offer a rich context for Safavid Shah Tahmasp’s visionary intentions, for himself and for his dynasty’s sacred tomb complex in Ardabil, northwestern Iran. This talk examines Iran’s political conditions in the year 946H (1539-40, the date woven into each carpet), and the likely dynastic significance of the two hanging lamps that form each carpet’s central axis. A shorter version of the talk was presented in 2019, at the HALI Symposium held at the Courtauld Institute of Art, London.

Dr Moya Carey is the Curator of Islamic Collections at the Chester Beatty Library in Dublin, Ireland. In 2009-2018, she was the Iran Heritage Foundation Curator for the Iranian Collections, at the Victoria and Albert Museum in London. Her research covers Iran’s visual culture in all media, particularly carpets, metalwork and the arts of the book, as well as the many contexts surrounding later appropriations and re-use of material culture. In 2017, she published Persian Art. Collecting the Arts of Iran for the V&A (London: V&A), which received the 26th World Award for Book of the Year in Iran. In 2022, she will present her first exhibition at the Chester Beatty, Meeting in Isfahan Vision and Exchange in Safavid Iran.