The Evolution of a Collector: George Hewitt Myers 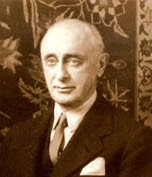 Sheridan Collins celebrates 40 years as a docent at The Textile Museum this year. A former print, radio and TV reporter, she wrote the first public profile of George Hewitt Myers which was published in Hali Magazine in 1985. While a docent, among other projects she created a slide talk of masterpieces in the Textile Museum which both staff and docents presented to groups interested in the museum. She also became the resident expert on the architecture of the Myers home on S Street, creating a docent tour and writing the brochure about it published by the museum in 2014. She is a member of Washington’s International Hajji Baba Society, and a collector of many types of carpets and textiles.