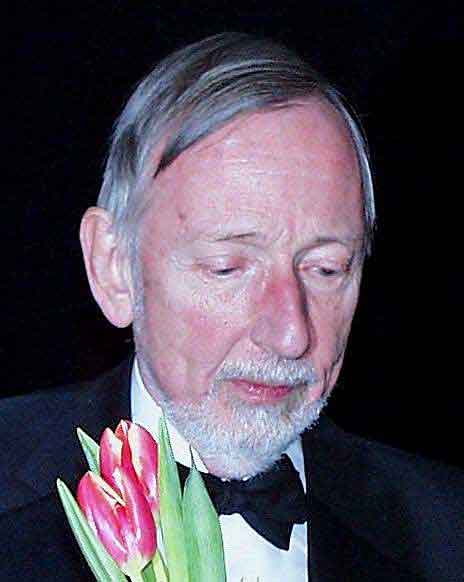 We first met Barry Jacobs in the mid 1960s, before the conferences, before the rug and textile journals, before the Rug World as we know it today, existed. But we did meet through a mutual Turkmen rug-mad friend, who was sure we would become friends, and we did. We all had so much to learn about carpets, and Barry Jacobs’ contribution to this world was large. He joined the Hajji Baba Club in 1972, became its president in about 1980, and remained in office until 1984. During that time he also gave the Hajjis a lecture on James Morier’s eponymous hero, Hajji Baba of Isphahan, which subsequently was published in HALI (#32, 1986). When the Hajji Baba Club had its Grand Reunion Millennium Dinner in January 2000, to celebrate this moment of Hajji history, he was asked to give the lecture again.

Over the years, he held various offices on the Hajji Baba Board, and in each function he showed his delight in the absurdities of the scheme of things. A great love of language would be evoked in the names and categories of carpets, and he always wanted to write the oeuvre, “Typische Turkische Teppiche”. As president, when giving his introductions for our speakers, every word was savored. The remarks were droll, and you felt he should be sitting with a large snifter in hand while enjoying a really good Havana cigar, making us realize we were at a remarkable event. His treasury reports were especially memorable, because although they were extremely brief, the figures were read very, very slowly, and comprehensible to us all.

He was born in Farmington, Illinois, where his father was a doctor, and his mother also contributed to the local library. His mother was a firm Democrat – and along with Barry’s splendid fund of stories is one about Vice-President Truman on the campaign trail. Alone, Mr. Truman hopped off a train, appeared at the library where he was to give a speech, and there was a very long wait for an audience. Mrs. Jacobs adjourned the meeting to their kitchen, where everybody sat around the table, and Mr. Truman was completely at ease, and an engagement with politics remained for Barry as an immediate and important matter of interest and concern. Fro his senior year at DePauw University he went to Sweden, and his subsequent distinguished academic career embraced comparative literature as he taught at Harvard, Montclair State College, summers again at Harvard, and lately also in Salt Lake City at Brigham Young University. His academic articles were legion, he spoke at many academic conferences around the world (thirty-six since 1981), and won several awards, wrote introductions to books on Swedish literature, and co-translated “Miss Julie”, by August Strindberg – and had the pleasure of seeing it produced, I believe in Holland.

One of Barry’s vivid qualities was to make one laugh and laugh, and his genius at friendship took him to many places on a regular basis. Winters used to take him to Cuernavaca – his account of appearing as an extra in Under the Volcano has made me watch the crowd scenes more than once. Other winters would take him to Florence, and many parts of summers were spent on Nantucket.

He often stayed with us when we lived in New York, and we gave courses together – first at the Montclair Art Museum in New Jersey, and later, we taught for five years at the New School for Social Studies (where we learned that the only way of being sure that the projectors would work was after we came to a little arrangement involving the presentation of a case of wine to the interested party in the basement). Although we divided up topics, I went to as many of his lectures as possible, because he was so funny. Once he riveted the students by bringing a Belouch rug under his arm. His description of how he learned to identify the feel of Belouchi rugs while walking on them barefoot at night will never be forgotten by any of us who hear it – and every time I see a Belouch with particularly luscious wool, I always want to take my shoes off. Then there was the semester with a bag lady who wandered in when we were showing slides of Kurdish and Shahsavan bagfaces, and after that she never left.

He was an immensely erudite man; he spoke fluent Swedish, French, some Danish and Norwegian, as well as German. He kept working on Chinese with another longtime friend, Joan Harman, and also studied Turkish, which he told me he found the most difficult. His apartment was crammed with furniture, pictures, books, batterie de cuisine (because he was also an accomplished cook) – and lots of smallish rugs. What kind of rugs did he collect? I remember a fine blue Perepedil, several small Caucasian pieces, mostly on the floor with a few on the wall. He acquired several of them from the Gregorians outside Boston, where he had spent many happy hours in pursuit of another weaving of gorgeous color, often rather precise and intricate design and nice condition. He loved going on a Textile Museum trip to Turkey, and the group on that trip (including Mary Hammond Sullivan and Mae Festa) became important friends.

At dinner, Barry was a memorable guest at the table. With whom else could one vie with titles of arcane lectures one had attended, with the winner’s laurel going to the dullest lecture? He won, hands down, with “Faroese Boat Names”. I would have liked to hear his talk on “Humor in Kierkegaard” to a Japanese audience. The lecture was very short. He came to a Hajji Baba meeting this spring (I believe to the talk Walter Denny gave us on Dvrigi in May), and he came looking distinguished, using a cane. Not many people knew of the very severe polio he had as a child, and had been on an iron lung for about 18 months, when his father was away, in Germany. He was greatly looking forward to his retirement, and I am sure there would have been more learned articles, as well as many evenings of conversation where one would have to leave the room to recover from laughing. And more stories delivered to his large circle of friends (who were happy to hear them again) in his scholarly, stylish way. In addition, Barry was fond of foibles, fascinated by the arcane, indignant at the mean and petty, and gave much pleasure with small presents. Barry Jacobs was a Hajji who loved rugs, and particularly enjoyed the motto of the Hajji Baba Club, that we should enjoy the fine arts, including folly. He would have loved to go to Isphahan.