by Jon Thompson
with an introductory historical essay by Thomas Farnham

Rugs in the City
(an extensive history of the Hajji Baba Club,
Chapter 1 from Timbuktu to Tibet)
by Thomas Farnham 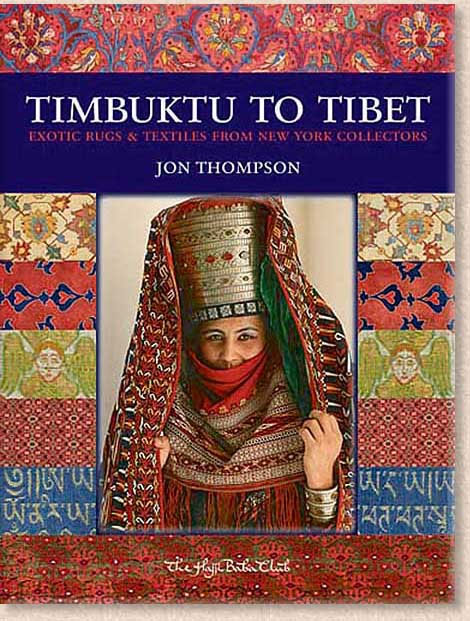 In Spring 2008, the oldest museum in New York City, the New York Historical Society on Central Park West, celebrates the 75th Anniversary of the Hajji Baba Club, the USA’s first and best-known rug and textile society, with diverse display of more than one hundred carpets and textiles, personally selected by the author from the myriad collections of Club members past and present. Known for their many generous donations to museums across the country, and their ongoing contributions to international carpet and textile study, successive generations of members have, since the foundation of the Club in 1932, broadened their collecting interests to include a great diversity of different textiles, mainly from Asia and Africa.

Timbuktu to Tibet accompanies the New-York Historical Society show, but is much more than an exhibition catalogue. All the exhibits are published in high quality colour, and Dr Thompson’s text is accompanied by more than two hundred additional historic, ethnographic and contextual images, most previously unpublished, showing how the objects were made and used, the people who made them, and their way of life. The book opens with a discursive history of the Club by the distinguished historian Thomas J. Farnham, bringing the total number of illustrations to almost four hundred.

The Authors – Jon Thompson has recently retired after six years of research and teaching as May Hamilton Beattie Fellow in Carpet Studies at the Ashmolean Museum, University of Oxford.Thomas J. Farnham has devoted the past several years to examining the roles of carpet collectors, dealers, and scholars, after a career spent studying, teaching, and writing about American foreign policy.