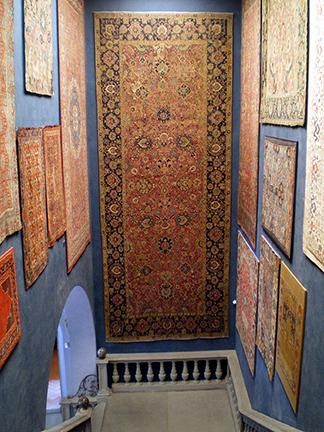 Stefano Bardini (1836-1922) was the undisputed leading dealer of the Italian and European Antique Art Market between the end of the 19th and the beginning of the 20th centuries. He was regarded as an art expert and true connoisseur and therefore nicknamed ‘The Prince of Antiquarians’.

Bardini was born in Tuscany, on April 13th 1836 to an affluent family of land-owners. In 1866 he joined Giuseppe Garibaldi as a volunteer in the third Italian Independence War and courageously fought in the Bezzecca Battle. After the war he settled in Florence where he started to work as a dealer in Antiques.

In 1872 Stefano Bardini met Wilhem Von Bode, Director of the newly founded Berlin Friederich Museum, with whom he shared a mutually profitable business relationship. Besides Wilhem von Bode, Bardini had many other important clients and among them prominent Carpet collectors including G.H. Myers, J.V. McMullan, B.Altman, H.Walters, C.T.Yerkes, I.D.Fletcher, just to mention the most famous of his American customers.

From the beginning his Gallery was conceived like a modern museum, with storage rooms, restoration workshops and a professionally equipped photographic studio. Today the Museum hosts a collection of 6,500 original negatives illustrating almost all the objects that passed through his hands.

There are two Bardini Museums now in Florence: the old one that belongs to the Municipality and has been renamed “Museo Stefano Bardini”, with 22 well known historical carpets and the new, not yet open, “Galleria di Palazzo Mozzi Bardini” with the other 30 antique carpets and many other, less important ones. This is just the tip of the iceberg, because from the photographs and the documents preserved in the archives, we know of other 100/120 historical carpets spread in various museums and private collections around the world and particularly in the United States. A few years ago, Professor Thomas J. Farnham published in Hali magazine a very interesting article about the many Bardini Carpets that ended up in the U.S. and are now preserved in various American Museums. The access to the Bardini archives lets us know the story of those carpets and of the many others that passed through his lucky hands.

Alberto Boralevi comes from a family of art dealers that have been in the antique carpet and textile business in Venice and Florence since the beginning of the twentieth century. In 1982, he discovered the now famous Medici Cairene Carpets in the Pitti Palace of Florence. For 15 years, from 1986 to 2001, Alberto Boralevi ran his Gallery, The Carpet Studio, in Florence. Since 2001 he works ‘by appointment only.’

Besides being an antique-textiles dealer, he has been scholarly researching antique carpets and textiles, publishing numerous articles, books and catalogues and working as a consultant for museums such as the Museo Stefano Bardini in Florence, the Museo del Tessuto of Prato, the Azerbaijani Carpet Museum of Baku (Azerbaijan), as well as several important private collections.

In June 2011, he received the Joseph V. McMullan Award for Stewardship and Scholarship in Islamic Rugs and Textiles from the Near Eastern Art Research Center of New York, being the second Italian and the first dealer to be honored with this prestigious prize.